Account
Settings
Language
European Union - Engilsh
Due to a limited amount of raw material, the creatine and whey products are excluded from promo coupons. Sorry for the inconvenience.
Skip to the end of the images gallery

Skip to the beginning of the images gallery
Food supplement

BCAA 4000 EXTREME SHOT® NITROLOADER SYSTEMTM is the first-ever product of its kind and a milestone when it comes to assisting athletes from the most demanding disciplines.

BCAA 4000 EXTREME SHOT® is a substantive and functional breakthrough concept utilizing and delivering the highest quality, crystalline instantised forms of branched-chain amino acids (L-leucine, L-valine and L-isoleucine). For the first time in history, the NITROLOADER SystemTM - a formula enhancing the effectiveness of the absorption of amino acids, the administration of which in liquid form has already overtaken powder solutions available on the market and resulted in tremendous efficiency, was created by experts from Olimp Sport Nutrition®, who are specialists in achieving optimum nutrition for physically active people. The BCAA 4000 EXTREME SHOT® is an innovation for athletes looking for the most effective solutions with respect to dietary supplements even in the most extreme training sessions.

By carefully analysing the physical exercise of highly active sportsmen and women, not only those practising endurance sports, but also strength and sculpting disciplines, i.e. bodybuilding, it can be observed that the activities that they perform are often characterised by high diversity, which further increases the high intensity of exercise. Emphasis should be placed on the creation of optimum nutritional conditions, including the use of advanced supplementation, allowing for proper nutrition which is understood as the reduction of the risk of catabolic states within the muscle tissue, ensuring the fastest possible regeneration after intense physical exercise and obtaining a state of supercompensation of energy (carbohydrates) and building (protein) resources.

BCAA 4000 EXTREME SHOT® - BCAAs account for about 1/3 of all muscle proteins!

Branched-chain amino acids play an important role in central fatigue which is related to the nervous system. Studies show that the amount of serotonin in the brain (responsible for the feeling of fatigue) increases with the duration or intensity of physical exercise.  BCAAs compete with tryptophan (the substrate which enables the synthesis of serotonin) for relays in the brain and, therefore, prevent it from penetrating the body, which allows for the feeling of fatigue to diminish. In addition, it has been found that branched-chain amino acids reduce the production of tryptophan in the liver (i, ii).

Muscle pain and stiffness is typical after an intense workout. It is a dull pain that develops slowly, usually reaching its peak between 24 and 48 hours after a workout. This feeling is very often confused with common muscle pains. The aetiological agent of these changes is the muscle cell damage the areas of tendon attachment. The pain usually subsides within a week of exercise, but the overall regeneration of damaged fibres is much slower. These changes are known as delayed onset of muscle soreness. 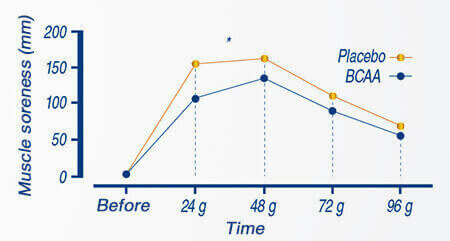 Chart 1. Delayed onset of muscle soreness, before and after intense exercise.

Chart 2. Creatine kinase concentration in the blood plasma, before and after intense exercise.

In another experiment, supplementation with branched amino acids in combination with glucose, decreased muscle soreness in women (compared to placebo, chart 3). Muscle soreness was examined for 4 days, every 24 hours from the end of the exercise (iv). 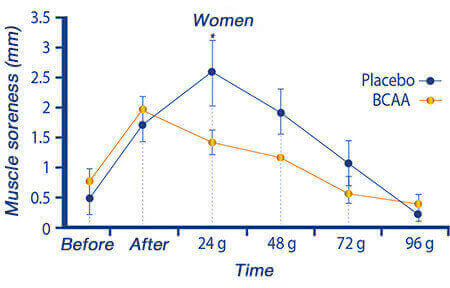 The experiment, which was conducted on 19 healthy subjects who spent 6 days in bed, showed that a lack of physical activity for such a short period of time resulted in a decrease in protein synthesis. In addition, an increase in the level of the BCAAs received helped to stabilise protein synthesis. The increased intake of BCAAs caused a 20% decrease in nitrogen excretion in urine, which indicates that fewer proteins are removed from the body (v).

In the BCAA 4000 EXTREME SHOT® the catabolic activity of branched-chain amino acids has been reinforced with a high dose of L-glutamine, which further intensifies the effect.

Similar conclusions were drawn from a study on cyclists who before, during and after workouts drank a BCAA-rich drink. Amino acids protected their muscles from breakdown (vii).
We can expect the analogy of the above-mentioned effect in people who practise other sports of a similar nature, including runners, marathoners, decathletes or participants in team sports.

WHY ARE THE COMPOUNDS USED IN THE BCAA 4000 EXTREME SHOT® SO IMPORTANT FOR PEOPLE PRACTISING SPORTS?
BCAAs are the basic building block of muscles - accounting for nearly 40% of their dry weight. BCAAs administered before workouts enable the protection of muscle proteins against breakdown, acting as an alternative source for the synthesis of glucose in the state of body exhaustion. They have a positive impact on increasing the efficiency of acquiring energy from supplementary fats, maintaining an optimal level of energy supply to working muscles. Acceleration of the rate of post-workout regeneration. A high level of BCAAs in the body during workout can reduce the production of serotonin in the brain which substantially helps to reduce and delay the feeling of general fatigue. In addition to having a catabolic effect, they effectively activate the pathways of the protein synthesis system and are a direct substrate for building lean body mass contributing to improving the figure.
If you want to practice for a long time and with the utmost intensity, while protecting muscles from breakdown, the BCAA 4000 Extreme Shot® is the ideal product for you!

BCAA 4000 EXTREME SHOT® - ANABOLIC building blocks allow you to build the muscles you have always dreamed about!

Due to the use of liquid technology, its components are immediately absorbed, they do not have to undergo the digestion processes that protein derived from food does. And it is the precious minutes directly after a workout that separates the champions from the rest. You can be sure that with the BCAA 4000 Extreme Shot®there is no delay in absorption unlike in tablets or capsules, and also in soluble powders.

LOOKING FOR HIGH-EFFICIENCY AND FAST ACTION?
BCAA 4000 EXTREME SHOT® IS RIGHT FOR YOU

BCAA 4000 Extreme Shot®- maximum ease of use:
an easy to carry handy ampoule, you can use the product at any time and in any place, you do not have to swallow numerous capsules or tablets, you can always be sure of the freshness of the product (1 ampoule = 1 serving).
WITH THE WILLINGNESS TO EXERCISE MORE, LESS FATIGUE AND PROTECTION OF MUSCLE TISSUE - NOW YOU WILL HAVE NO EQUAL

Once again, you can see why the BCAA 4000 Extreme Shot® is the best choice for you:
pharmaceutical quality of amino acids used for the production of BCAAs, only free forms, and not commonly used filtrates of hydrolysates contaminated by other amino acids, instant effect guaranteed by the liquid form of the product optimal for sports exercise ratio of L-leucine: L-valine: L-isoleucine = 2:1:1 synergy of the components (addition of taurine and B vitamins) convenience of use through a handy ampoule, excellent, aromatic flavours, no added sugar, so far the largest concentration on the market per 1 ml of liquid consumed, BCAA with improved solubility (instantised) - better digestibility, handy and convenient in the form of a small ampoule that can be carried in a pocket or belt, ready to drink, time saving and convenient, no need to prepare a shake, high concentration - low stress for the digestive tract, a wonderful taste that does not leave the feeling of thirst or dry mouth.
THE TASTE OF BCAA DOES NOT HAVE TO BE A PUNISHMENT, IT CAN BE A PLEASURE!
FASTER REGENERATION, INTENSE CONSTRUCTION OF NEW PROTEINS, PURE MUSCLE MASS IN LIQUID FORM!
BCAA 4000 EXTREME SHOT® - INSTANT NUTRITION FOR YOUR MUSCLE

Warning: Children, pregnant or lactating woman shouldn’t use this product. Sediment may appear but it does not influence product quality or properties. Keep out of reach of children.